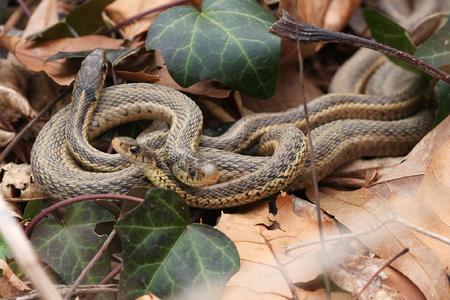 There are currently seventeen species of snakes in New York, three of which are venomous. Long Island does not have any native venomous species, but is home to eleven of the seventeen indigenous snake species. There are a few that are more commonly found in or around houses in Suffolk County. The Common Garter Snake (Thamnophis sirtalis) and the Eastern Milk Snake (Lampropeltis t. tiiangulum) are usually found in basements, crawl spaces, garages, under decks, sheds and inside barns. The Northern Water Snake (Nerodia s. sipedon) is usually found sunning itself on docks, pylons and bulkheads near our local lakes, beaches and waterways. All three of these species are between 2'-4 ½' long and have slender builds relative to their length. Being non-venomous, they all have round pupils, no pits between their eyes & nostrils and have slender heads.

Snakes are silent by nature and can not vocalize. However, some species like our non-venomous milksnake are known for shaking their tails in leaf litter to alert trespassers of their presence like a rattlesnake. All snakes are cold blooded and need to physically move between temperate zones (hot/cold), this is called thermoregulation. On cooler than usual days, any of our eleven local species may be found lying on heating ducts, wedged inside door jambs or in vehicle engine bays seeking conductive heat to warm up.

Snakes do not chew or create holes, they simply use existing damage or breaches to enter your property, building or home. They enter via gaps near pipes, torn screens, open windows, cable routing, soffit damage, under crawl space fascias and cellar doors. They follow their prey items into structures using their amazing sense of taste & smell. Snakes feed on a wide array of items including earthworms, slugs, fish, amphibians, insects, rodents, spiders and even eggs. There is usually little evidence of their feedings because they swallow their prey items whole. Therefore, many people don't even know that they have snakes in their house or on their property until they actually witness one slithering across the room or lawn. Another sign of their presence is shed or slough skin that is usually found in rock beds, log piles, leaf litter or on tree branches but can sometimes be found in basements or boiler rooms where the relative humidity is higher. Snakes usually use rough textures and higher humidity to help excise their previous skin. Snakes hibernate from around October through April or May in groups or den sites called hibernacula. They are faithful to these specific sites and will actually mix snake species within one large den.

Ophidiophobia or the fear of snakes is the second most common phobia worldwide. The only thing more common is the fear of spiders (arachnophobia). Even though Long Island's snakes are non-venomous, they should not be handled without specific training or knowledge in the temperament and control techniques of each species. A non-venomous snake bite can still lead to complications including infection due to the recurved shape of snake teeth and the bacteria they have in their mouths. If you are bit by a non-venomous snake species, verify that there are no broken off teeth in the wound. Then sterilize the area and apply antibiotic ointment before bandaging it. Always make sure to use proper personal protective equipment, appropriate tools and methods needed to handle the species in question.