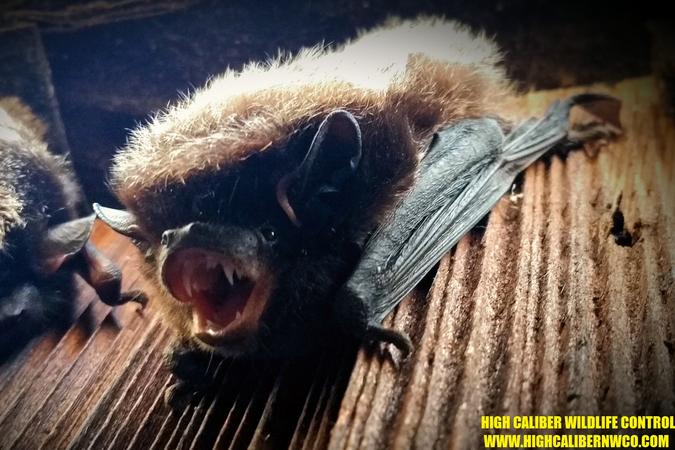 There are nine bat species in the Northeast, the two main species found on Long Island are Little Brown Bats (Myotis lucifigus) & Big Brown Bats (Eptisicus fuscus). Their average lifespan ranges from 24-40 years. Big Browns are 4”-5” long and weigh 3/8oz-5/8oz with a 12” wingspan. Little Browns are 3”-4” long and weigh a mere 1/16oz-1/2oz with a 9” wingspan, these are Suffolk County’s most abundant bat species.

At dusk and dawn you may see bats entering and leaving your home or building to feed. They are easiest to see at dawn because they do several circle flybys around their entry hole before entering their roost. Other signs of their presence include piles of black feces also known as guano under their main exit/entry hole. Daytime roosts (congregations) can be found in attics, gable vents, garage, soffits, behind shutters, under siding, under roof shingles, in wall voids or chimneys. Night time roosts usually consist of them resting between feedings on garages, awnings, breezeways or in door jambs. Bats use ultrasonic pulses called echolocation to locate food sources and to guide their flight paths.

Contrary to popular belief, our local bat species do not suck blood. They are all insectivores and feed exclusively on insects like moths, mosquitoes, wasps, gnats, beetles and assorted flies. One little brown bat can consume over 1,000 flying insects per hour and usually feed between one and five hours per night. So a small colony of 100 Little Brown Bats can lower your yard’s insect population by hundreds of thousands per summer. That is why appropriate sized bat houses play an important role in bat conservation and are recommended if you are okay with bats living in your backyard. Both species hibernate through the winter in colonies or hibernacula that can sometimes be found within buildings, attics and wall voids. Bats are born between May and July and usually start to fly between July and August. That is why we receive so many juvenile bat calls over the summer, young bats do not yet possess homing echolocation skills or the ability to truly fly like their parents. It is very important not to complete bat exclusion work during these two time periods each year, the possibility of trapping bats inside the attic or wall spaces is too great and is a death sentence to the bats.

Even though bats are fascinating and important to our ecosystem for so many reasons, they should always be handled by a professional. Bats are the second most common rabies carrier in New York State and inexperienced handling of them could lead to an unexpected bite. The most recent local rabid bat activity was recorded by New York State Dept. of Health in June of 2017 where three separate rabid bats were found in Sayville, Islip & Islip Terrace within one week. Thankfully no humans were infected during these occurrences. Statistically the odds of interacting with a rabid bat are low, but why take a chance if you do not need to.

Little Brown Bats (Myotis lucifugus)
Known for their voracious appetite for all your flying insects...

up to 1,000 insects per hour during summer feedings.

If you think that you have bats, schedule a professional bat inspection today.

"black-out" periods, these include summer maternal season and winter hibernation.

You can add HTML directly into this element to render on the page.

Just edit this element to add your own HTML.