Star-nosed moles (Condylura cirstata) and Eastern moles (Scalopus aquaticus) are the only two species of moles found on Long Island. Their average lifespan ranges from 4 to 6 years. Star-nosed moles are usually between 5” to 5 1/2” long and weigh around 2oz, they have a large pink star shaped snout with 22 fleshy projections that look like a sea anemone.

Eastern moles (Scalopus aquaticus) are the most abundant mole species found in Suffolk County. Their average expectancy is up to 6 years old. They are usually between 3” to 8” long and weigh approximately 3oz to 8oz. They use “runs” to navigate through lawns, mulch beds and gardens; these tunnels sometimes parallel driveways, fences, foundations, ponds and usually head directly into local wooded areas. Tunnels are more frequent and noticeable in well manicured, frequently watered lawns (irrigated). When soil is dry and hard, moles do not go away, they just tunnel deeper to softer soil. Their runs usually end in tell tale molehills, also known as boils, they look like small dirt piles around the tunnel ends.

Moles are active both day & night and do not hibernate, they just burrow deeper to under the frost line during colder months. Moles are very territorial and have a range of ½ acre to 2 acres, their home ranges can overlap. They can burrow at a rate of 18' per hour and unearth over 100' of new tunnel per day. Moles are carnivorous and eat grubs, earthworms, beetle larvae, small fish, tadpoles, frogs and even some carrion. They must consume equivalent to almost 100% of their body weight to maintain the required energy to burrow. Moles are sometimes accused of feeding on crops, flowers or gardens which is very uncommon, the usual culprit in those situations are voles, mice or rats.

Moles breed in the early to late Spring and have about a 45 day gestational period. They give birth to around 3 to 5 pups in the late Spring to early Summer. Therefore, April & May are the most important times to start trapping moles before they can reproduce. The young stay with their mother for up to a month and then are on their own to make new travel & feeding tunnels. 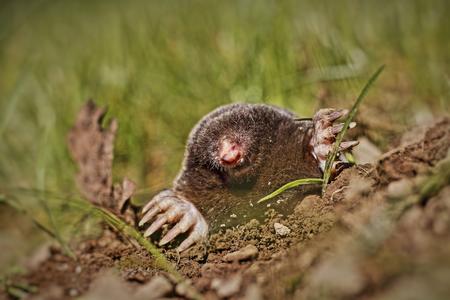